It’s been four days. They chicks have hatched. It took two nights of red wine and tea and chirping to eggs, then the cracks started to appear (in the egg shells as well as our patience). And then the first arrived. 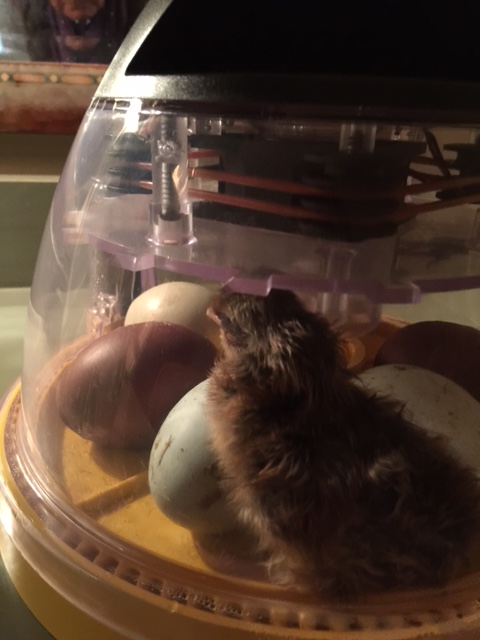 She was wet and ugly before becoming lovely and fluffy and unfortunately I wasn’t around when it happened. So I made sure that I was there for the second one. Oh my goodness! I have never seen anything being born! It absolutely blew my mind. The small, round egg was totally stuffed with this much larger chick. When the first part of the shell came off, we couldn’t tell where the head was. It looked surreal – an open shell full of wet feathers where you normally get your breakfast…

Suddenly a huge foot shot out. Unexpected and powerful. Then we watched a little chick emerge from its temporary home. I was quite emotional, actually.

The amazing thing is that these little creatures are born after just twenty one days and are pretty much fully developed. Ok, they are tiny but they walk, they can find water and drink and they can feed themselves after a few hours. Give them a few days and they are already fighting and pecking each other just like their mothers. And we call them bird brains. It takes humans years just to make sense out of our toes, noses and belly buttons, for goodness sake.

There are three chicks now; two from green eggs and one from a red egg. She was born very late and almost died with the effort. She managed to peck a little hole in the shell and then her chirping became quieter and quieter. Against all advice we decided to help her a little. We peeled a bit of the hard outer shell and left the soft membrane. Her little beak was struggling even with that task. Half open, we left her in the incubator during the night. And she made it. She is yellow and just as loud as her sisters. Her name is Lucky.