It all started when I saw the photo taken by the British astronaut Tim Peake while he orbited the Earth earlier this year. It was of ‘Mt Etna having a cheeky smoke’. I loved it. It made me think of my friend, who spends most of her time doing exactly as she pleases. And she is good at it too. 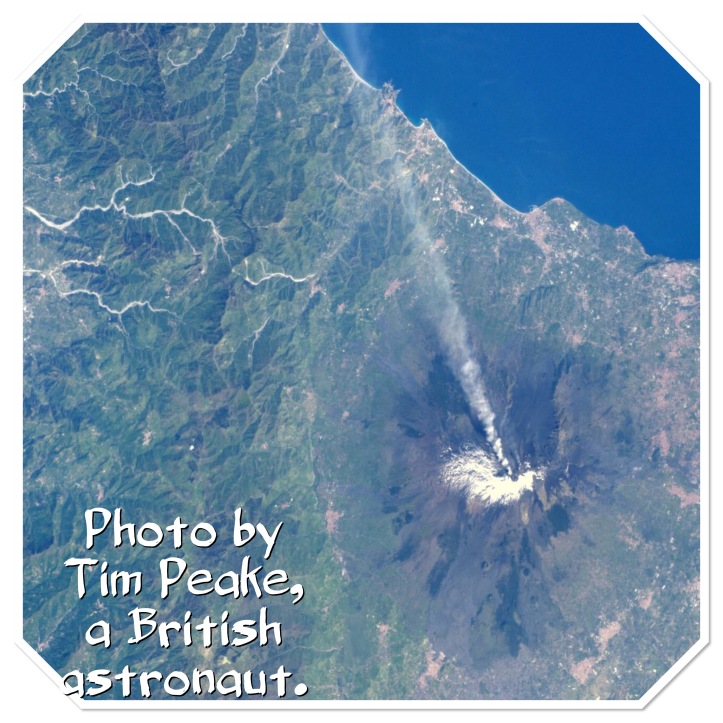 Recently my friend celebrated a birthday that some of us haven’t even thought about yet. However she was not daunted. Admirably she planned her whole year around this landmark. It was going to be The Year Of The Volcano.

She started off by taking her son and his family (including the grownup grandchildren) to Sicily. They enjoyed the Italian hospitality, drank wine and climbed up the said Mt Etna as far as the cloud would let them.

The second point of the big year (and a total surprise for her) was one of her friends hiring a Harley Davidson, making her dress up in a leather jacket and trousers and spending a day on the back of the bike. Ok, so it’s nothing to do with the volcanoes but the turquoise Harley made her feel on top of the world.

Point number three. Her other son organised a three week holiday in Hawaii with, yes you guessed it, a tour of the islands and the volcanoes. One of the trips involved a helicopter flight right over the smoking peak.

By this stage we all thought that perhaps she’s seen enough lava and smelled enough sulphur to last her for a while. Oh no! Before her Hawaiian tan even thought about fading, she was off with her granddaughter to Reykjavik. They hired a jeep and ‘nice young man who drove like crazy’ to show them around Iceland. The Eyjafjallajökull literally shot to fame in 2010 by spewing up smoke and ash, consequently causing the world travel to grind to a halt. My friend loved it.

She has been home for three weeks now and is getting itchy feet again. Perhaps the volcanic ash is like the dust of Africa – once it gets under your skin, it’s impossible to get rid of. And so very casually she told me today that she has just booked a trip to Lanzarote, where she will indulge in her passion even further.

I could be jealous. Instead I hope that I ‘grow up’ to be just like my friend. And perhaps have a cheeky smoke like Mt Etna too.